Sometimes I like to walk around Toronto streets and wonder what it all would have looked like in the beginning – back when it was called “York.” What was it like to walk along Bloor St. when St. Paul’s was a ‘countryside’ church and there was mostly wilderness to the north? Today, we walk the same streets under the same blue sky, but I imagine the city would be scarcely recognizable to an early settler.

This past week, I came across two resources that have been like a window onto the streets of old Muddy York. The first is a website dedicated to showcase historical maps of Toronto. Here is my favorite one: 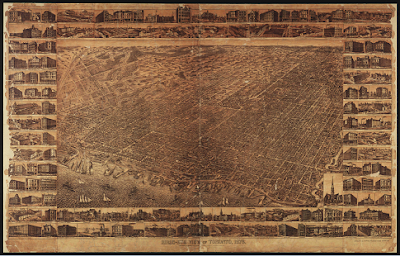 Unlike a typical map, this gives you a perspective as if you were flying over Toronto Island looking north. It’s done in the most intricate detail – difficult to appreciate when you look at the whole. But you can zoom in to find each street and building as it appeared in 1876. Here’s what my neighborhood, St. James Town, looked like then: 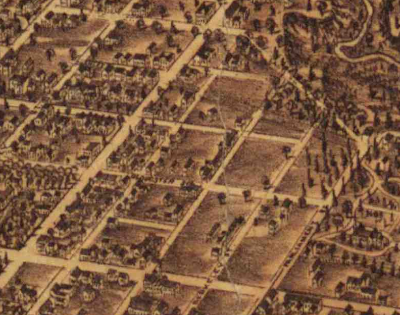 Today it's home to about 24,000 souls living in 18 high-rise buildings. Imagine!

To get a perspective closer to the ground, there is a wonderful book titled Pen Sketches of Historic Toronto by J. Clarence Duff. The Red Lion Hotel, pictured below, gives a sense of the rural atmosphere on the city borders. The hotel was popular with locals, with its tavern and dance hall providing a warm atmosphere for social events. 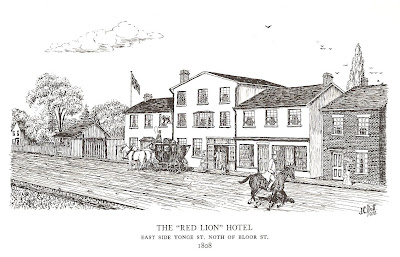 I love this second one. The Church of the Holy Trinity was built on the outskirts of the city when it had about 20,000. Here, it’s pictured surrounded with peaceful cottages and greenery. 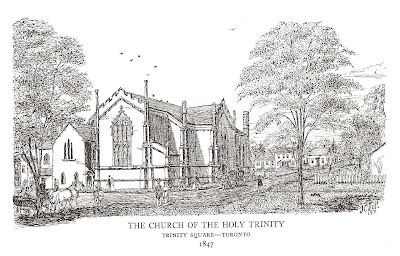 What surrounds it today? That’s right, the Eaton Centre, the beating heart of our city shopping scene. At first it seemed to me a great shame that the church lies mostly forgotten when it used to be the focal point of the community around it. But perhaps that's what makes it a place of tranquility today. As summer is coming up, the leafy courtyard is well worth a visit for its own sake.